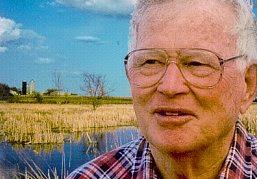 C. Beck is a short documentary on woodblock print artist, Charles Beck. The short explores his work in regard to technique and attitude, and ventures to make a statement about art in general.

This film was the PBS Independent Lens Grand Prize winner. The Independent Lens festival is a short films online submission festival that accepts films in the genre of animation, comedy, drama and documentary.

While there were some interesting visual techniques used in this short, for the most part I was distracted by flaws. One huge flaw occurred when the filmmaker was attempting to film Charles in his car. Apparently he fashioned a red flannel shirt against the car window to minimize glare. But then, in the middle of the shot the shirt fell. I was completely distracted by Charles’ attempt to re-hang the shirt that I fell out of the story.

Following typical documentary form, this piece attempted to make a narrative out of a real life event. This is an interesting idea. Documentaries claim to be true stories, or “documenting” real life events. But this begs the question, is simply documenting even possible? The mere construction of the narrative falsifies the content.

But back to the short film genre in particular: I have to wonder if an attempt to document the entirety of a man’s career in 7 minutes is a fair construction. On the flip side, I was ready for this film to end quickly after it started. I cannot yet determine whether it was the subject matter that bored me, or the lack of depth to the story. There was only so much time, and therefore, the short documentary did not delve into the heart of this man’s story. It simply skimmed the surface. It is this that brings me to the conclusion that I do not know that the short documentary is effective, as it does not allow for any depth, that possibly results in an unfair construction of a person’s story.
Posted by Christine Barndt at 4:43 PM

Email ThisBlogThis!Share to TwitterShare to FacebookShare to Pinterest
Labels: documentary

Your comment about the possibility of "simply documenting" is really interesting. I don't know that every single documentary film does attempt to construct a narrative, but I'm sure it's probably more common than in documentary writing (i.e. journalistic pieces, or I guess investigative nonfiction in general) because of the need to break even financially. If we really want to go there, we could consider the Heisenberg Uncertainty Principle, which states that observation of a thing changes the thing being observed in and of itself. In this case, any kind of reflection at all, even in the context of "pure" documenting, would not truly and accurately reflect the events in question.

I always watch documentary films with a feeling of doubt. How can a life of one person be so entertaining that you can make a feature-length film out of it? At the same time, though, a 7-minutes film seem a little short to summarize one's life.

The legnth of the film reminds me of an in-depth commercial. Rarely can you get truly invested in someone in 7 minutes. And that makes the "mistakes" in the film that much more obvious and irritating.

I agree that 7 minutes is entirely too short to do justice to an individual's life story. It is important to remember that in making a documentary, for every shot that is included, there are probably hundreds more that have been excluded. The filmmakers artificially construct a narrative by deciding what aspects of an individual's life are "important" enough to merit inclusion.

I felt like I wanted to get to know the artist. It was too much skimming the surface for my taste.

I believe documentaries success are based on the "subject" boring subject boring documentary. Beck my be an artist to know but he is just another person after all

While I found the attempt to portray a man's professional history in seven minutes interesting, I found that no amount of clever shooting could compensate for the fact that 7 minutes of my life have now been spent learning about woodblock printing.

I feel like the short documentary is, quite honestly, somewhat useless. What you all have pointed out here is that this bio-doc promises to deliver the entirety of Beck's work in 7 minutes, an insult to a life's body of work. The film seems to promise a complete look and then doesn't deliver. We are not given a series of snapshots, but rather a linear narrative. Therefore, it becomes somewhat dishonest.
P.S. I also felt similarly to whoever wrote the last comment, I wanted my life back after watching this doc...and that's precisely why I blogged about it :)

i don't know about everyone else, but I couldn't get over all the techincal issues. I mean, come on! the shirt on the window! How could anyone take this seriously. Was this a student film? Ahh!!!

It's funny that people tend to find these documentaries boring, but turn it into a "mockumentary" and it'd be a hit.

good point. if we simply labeled this a mockumentary, it would probably be funny

I don't understand why directors proceed to make documentaries so boring. I understand that they are suppose to be informative but as you said many documentaries even long ones tend to not dive deep into the heart of the directors passion for the subject. To convey this passion in a documentary is what defines success in this genre

I found this to be really boring... the film that is!

I found this to be really boring... the film that is!

never turn an eye away from wrongdoings. a 4 minute short.
https://www.youtube.com/watch?v=cx61UBfkKKc