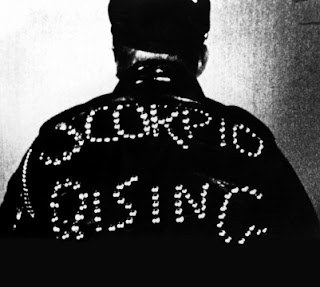 Kenneth Anger's very influential and enigmatic Scorpio Rising is a classic of the experimental genre, and it manages to combine leather clad bikers, early 60's music, homoerotic undertones, a James Dean and Marlon Brando obsession, Christ imagery, and Swastikas into a kind of documentary-like and music-filled bouillabaisse of both motorcycle culture and the early days of the culture-churning "Age of Aquarius."

It was experimental and taboo-breaking enough (according to an interview with Anger) that the film was cited for indecency and pulled from theaters by the Hollywood Vice Squad when it first ran on the underground circuit. The California Supreme Court later overruled objections on the grounds of redeeming social merit. Anger has crafted a career out of shocking people both in video and print. His Hollywood Babylon books, for example, chronicle the myriad scandals of early Hollywood.

Scorpio Rising uses no dialogue throughout, but instead relies on the guttural roar of motorcycle engines and an ongoing soundtrack of 13 songs, beginning with the jangly back beat of Ricky Nelson's "Fools Rush In (Where Angels Fear to Tread)" and ending with the Surfaris classic "Wipe Out." Viewers are led gently by the hand via Nelson's song into scenes of bikers cleaning and prepping their motorcycles, lulled almost into a false sense of security, before heading to the more controversial elements of a frat-like Halloween biker party, a biker taking over an empty church, various flashing Christ movie images, and Swastika checkers pieces, among other things.

One of the more iconic images in the film is a cartoon of a sun glass-wearing skull that appears near the end, with a cigarette dangling out of its mouth. Stenciled on the cigarette is the word "youth." Is this a foreshadowing of what would eventually befall the "What are you rebelling against? Whaddya Got?" generation, a metaphor for the young soldiers then heading to Vietnam, or just a general comment on how quickly youth flies by?

I found myself engaged from the start with the movie, and a lot of this has to do with the music, which flows from scene to scene and acts as its own kind of dialogue, and I hardly noticed the fact that this was 28 minutes (I found myself looking at my watch a lot more when I watched the longer non-musical experimental films in class). I think each viewer can draw their own conclusions from watching this montage; I found myself both fascinated and a bit disturbed, and contemplating the strange dichotomy of that turbulent time between the the Utopia of "Flower Power" and the murderous onslaught of Charles Manson.

Interestingly enough, the word "documentary" does appear often when researching this film. These are not professional actors. Anger found this group of bikers in Brooklyn, N.Y., and encouraged them to realize their full narcissistic selves in front of the camera.

The music and brazen attitude of Scorpio Rising, and other Anger-directed shorts, influenced some big names in Hollywood, including Martin Scorsese, David Lynch (who obviously took the song "Blue Velvet" and ran with it 20 years later), and Quentin Tarantino. Scorsese, in at least one article, stated the Scorpio Rising played a major influence in his thinking about how music could be used in film.

We spoke in class of how much the ideas and images of experimental film, with their often limited audience, can go on to become the basis for trailers and music videos. I think Scorpio Rising is a great example of this - an underground short-film vision that still reverberates in features and music videos 30 years after its premiere.
Posted by Benjamin at 11:30 PM

I particularly liked the intercutting of the comics, with their violent themes (the skulls in the Dick Tracy title) with the pictures of James Dean, the Marlon Brando posters, the video of … (well, what movie was that anyways?), the constant barrage of pop culture amplified by the soundtrack of one of the must cutthroat markets out there – pop music in the 1960s.

The way in which rebellion is so carefully commoditized and packaged, in this movie, that it sometimes

The way in which the actor casually but oh so calculatedly pulled out a cigarette, then puts it down, pulls out a match, and lights it on his teeth (taking several tries to get it right), seems emblematic of this careful posing. Only the party scenes feel remotely unstaged, and as gross as some of them are, human. The rest of it seems to convey an impression of being prepackaged.

Or maybe it’s just hard to watch those homoerotic dressing scenes of naked, cut torsos without thinking of the Calvin Klein ads that have reproduced (stolen?) that imagery. It’s hard to watch the intercutting of the bible story movie (making a rather bizarre comparison with Jesus) without thinking of Monty Python’s Life of Brian. Likewise, I’m sure the shock value of the church scenes were much greater 40 years ago. If the filmmaker was going for a “these guys are martyrs” message, it just doesn’t work for me. The whole intercutting of religious scenes just feels muddled.

sounds like an interesting film, Ben. I'll check it out (if me 'hi-speed' Thai internet will allow it!) and write more...
Barry