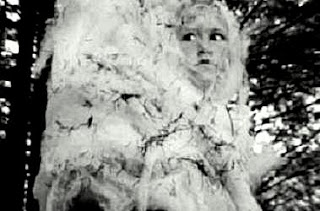 One of the advantages of university library access is watching all of the Wholphin DVDs I've missed out on by not having the cash for a subscription. I found Kinky Hoodoo Voodoo in the fifth issue, and out of all the films on that disc, this is the one I was most confused and intrigued by. The short uses no dialogue, choosing instead to employ intertitles in a homage to the silent era. Oddly enough, the provided text adds little to the viewer's understanding of this strange experimental sci-fi film.

Voodoo begins with a young boy attending summer camp. He is inexplicably drawn towards another area of the camp, where he watches a woman sensuously massage herself with a loofah in an outdoor shower. Shortly aferward, a group of his fellow campers march into the shower tent, where the naked woman and campers have been consumed by and/or have morphed into a giant, throbbing alien blob. He is then abducted by two aliens from Saturn and carried into the woods, where he is encased in a white web on a tree. Then, in a flashback sequence, one of the Saturnians emerges from a lake, implying that the aliens had been watching the camp all along.

It's a convoluted narrative that invokes early fetish films, 1920s experimentals, and the 1950s extraterrestrial robots a la Forbidden Planet all at once. Though I'm probably alone in this, the scene where the campers are wrapped in webs reminds me of the cotton candy cocoons in Killers Klowns from Outer Space. It's a weird combination that has made the director, Velasco Barco, something of an underground cult phenomenon in Spain.

I'm completely perplexed by the title. Voodoo's from Haiti and Hoodoo is from Africa. The only part that almost makes sense is "Kinky," since the film includes the one scene of voyeurism. I'm not sure what any of these elements have to do with an alien invasion in 1990s Spain, but perhaps that's why the film is described as experimental.

Even if Barco's ideas are a bit obtuse, the director has created something strangely compelling. The short feels like a metaphor for male adolescence, a frenzied mix of naked girls, aliens, and outdoor adventures. Like most experimental films, however, the tendency to extrapolate symbols and concepts is stronger than actual evidence of a deeper meaning. Luckily, I don't think an underlying metaphor would affect my enjoyment of the film; it's still terrifying, surreal, and frustratingly abstract.
Posted by Ashley Joyce at 8:59 PM

If you're interested, I found a copy of this film online: http://twitchfilm.net/archives/004259.html

i just watched that downloadable version. i wish i had a better comment, other than ..what? you're right that it's a frustrating movie.

That was weird, and I'm glad I didn't watch it in the library because that shower scene would have been awkward.

Rob, I actually did watch it in the library, and people walked by during that shower scene and gave me weird looks.

It's a strange movie, but I think if you look at it as either aesthetically interesting or a metaphor, it makes a ton of sense.

that was weird, but I liked it, and yet I feel strange for liking it? I know it's not old, but there should totally be a Mystery Science Theater of that movie.

I haven't seen this film but I'm really interested in learning more about foreign sci-fi. I've seen a lot of American sci-fi but never anything non-English language. I'm glad to hear it exists.

This movie was trippy, but your ideas in the blog entry were good for trying to interpret it.

Thanks for guaranteeing me nightmares, Ash, those robots were freaky as hell.

I liked the movie about the tin man on this dvd better, but i liked this too. it seems like the kind of clips the djs mix with techno at clubs.

Troy, I actually thought the same thing when I saw this for the first time. It reminded me of footage I saw an Australian band called The Red Paintings use in their show when they toured with the Dresden Dolls.