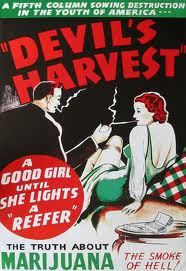 This short educational movie runs for 66 minutes. I really enjoyed the movie and found it funny. Although mostly none of the facts from the movie are based in legitimate the effects of the movie are far reaching. I am impressed with the movies cinematic qualities. One of the opening scenes of the movie depicts blocks of herion being burned in a fire as the narrator reminds the audience that marijuana is more dangerous than heroin...Wait what? This movie is more than the first stoner flick, it actually influenced America so much that to this day its still Reefer Madness in America. Under the controlled substances act Marijuana is schedule 1.

Schedule I is the only category of controlled substances that may not be prescribed by a physician. Drugs must meet three criteria in order to be placed in Schedule I:
Posted by Jeff Liao at 4:40 AM

Thanks for the great post on your blog, it really gives me an insight on this topic.