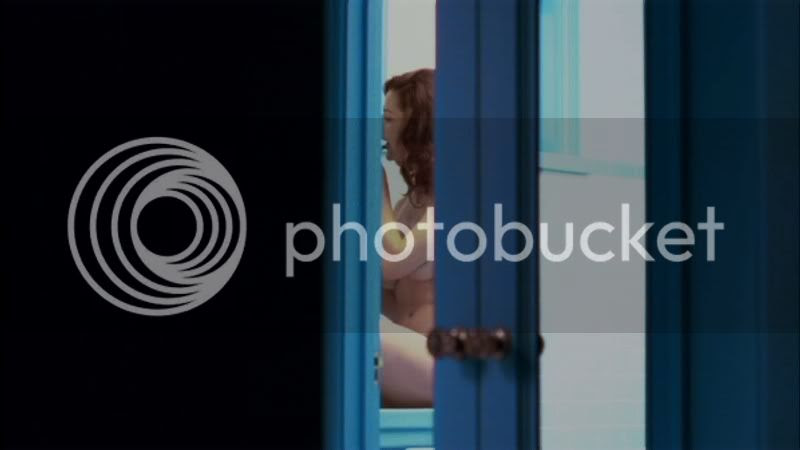 EQUILIBRIUM
Directed by Steven Soderbergh, USA, 2004, approx. 27 minutes
Source: Eros (DVD)
The second short in the series of three that make up Eros, Steven Soderbergh's "Equilibrium" is by far the least erotic and most humorous.  Sandwiched between Hong Kong auteur Wong Kar-Wai's brilliant "The Hand" and veteran trailblazer Michelangelo Antonioni's shockingly misguided "The Dangerous Thread of Things," this short film finds itself in an artistic middleground, approaching the uniting theme of eroticism from a wholly unexpected angle.  We follow Robert Downy Jr. as a clock designer suffering from an insurmountable creative block and a recurring sex dream that has placed additional stress on his marriage.  He visits his psychiatrist as played by Alan Arkin, in an extended scene that might just be a dream in itself.  While Downy seeks answers to his problem, we discover Arkin to be a distracted voyeur who spends the majority of the session differing his patient's attention so that he might signal a beautiful woman in a building across from his.
The ultimate deduction is that even in a setting where a professional is paid to listen to and even analyze someone's personal feelings, what one individual finds deeply erotic or exhilarating is likely be completely uninteresting to someone else.  While the depth of the explored thematic content doesn't stretch far beyond that single observation (Soderbergh doesn't quite approach the richness or prolonged melancholic regret of Wong Kar-Wai's segment, not does he wallow in cheap sexual exploitation like Antonioni's) much of this film's enjoyment comes from Soderbergh's signature storytelling tropes that bend perception and chronology.  In this case he develops a persistently surprising plot line culminating in the invention of the snooze-alarm and a fantastic punch line involving Alan Arkin in a bad toupee.
However, much can also be said about the lush visual craftsmanship of this particular section which rivals even that of Kar-Wai's.  The precise attention to period detail in the sets and costuming, along with inspired musical choices and sharp cinematography, make this a film from which I never want to deviate my eye in fear of missing a particularly stunning frame.  In fact, much about this picture reminds me of AMC's brilliant new series Mad Men which shares a similar aesthetic across the board.  The dream sequence specifically features a gorgeous saturated blue color palate and woozy handheld camera work that tricks you into feeling like you really are waking up from a deep sleep when the film shifts to the stark black and white used to film the therapy session.  The contrast between these two dominant visual motifs lends great weight to the subtext that one's fantasies are inherently more saturated, vibrant and appealing than the realities of everyday life.  It's a thread that's shared between all three segments here, and while Soderbergh might be the least acclaimed of the three talents on display in this collection, his film demonstrates the most acute control over these common visual aesthetics and over the short film medium as a whole.
Posted by Lance McCallion at 8:43 PM

Email ThisBlogThis!Share to TwitterShare to FacebookShare to Pinterest
Labels: narrative

I've had Eros for a while but never watched past the Wong segment, as I'd read the latter two segments weren't essential viewing.

This write-up has convinced me to revisit the film.

I've always meant to watch more short films, but never seem to pull the trigger. Your well written review of this film has inspired me to watch it.