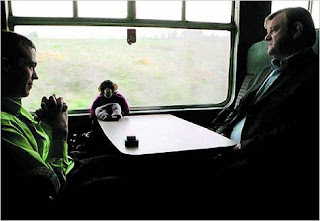 If, as Freud famously asserted, everything in life is either about sex or death, Six Shooter is most certainly a meditation on the latter. The film follows Donnelly (Brendan Gleeson), a man whose wife has died unexpectedly, on an ill-fated train ride to Dublin. Donnelly finds himself in a cabin with a demented young man (Rúaidhrí Conroy) who taunts a couple mourning the loss of their infant son and expresses no sadness regarding the recent death of his own mother. Begrudgingly, Donnelly begins to take comfort in the boy’s detachment. But before the end of the journey, he makes a horrific discovery about his travel companion that propels the film towards a bloodbath of a conclusion.

Six Shooter is fundamentally a character study that focuses on the various ways people cope with death, especially when such a loss is so profound that life seems to lose all meaning. In addition to the intimacy of the set, frequent close-up shots of the character’s faces emphasize the importance of personal experience. The actors are seated close together on the cramped train, a physical representation of how psychologically involved they become in each other's grief. When one of the bereaved parents on the train angrily tells the unnamed, inquisitive young man to mind his own business, the audience senses the futility of the request: death, in a way, is everyone's business. Somehow, McDonagh manages to make such maudlin subject matter hilariously entertaining.

It is noteworthy that Six Shooter is not only Martin McDonagh’s directorial debut, but also his first foray into the medium of film. McDonagh is an award-winning playwright known for his proclivities for pitch-black humor and stage violence. In fact, I became interested in Six Shooter after seeing a fantastic staging of his play The Cripple of Inishmaan. I was especially interested in whether or not McDonagh’s background in theater would come across in his first film. In some respects, I believe it did: for instance, as in most modern dramatic works, the main action occurs in a single room, in this case a train cabin. But the film is certainly not “stagey,” and in fact won the Oscar for Best Live Action Short in 2005, validation that McDonagh’s transition from stage to screen has been seamless. In 2008 he released his first feature, the critically well-received In Bruges, which also starred Brendan Gleeson in addition to Colin Farrell and Ralph Fiennes.
Posted by Ashley Joyce at 5:57 PM

i wish i had been able to see this, i haven't been able to find it online anywhere. In Bruges was hilarious, and this sounds similarly good!